have you ever notice that the pastel of yellow is pastel yellow, the pastel of green is pastel green and the pastel of red is pink? i really wanted to do this mani in pastels but was unsure how to make sure it was read as red and not pink. i used one of my favorite polishes: kind of a neon pink / salmon-y color.

i also had an idea for a different style of fishbraid – i wanted all three colors on each stroke. it kinda looks like if you have three brushes stuck together, like in calligraphy, or like i (and maybe you) used to do when i was a little kid with crayons. i don’t mind the blast-from-the-past aspect of that!

i like the way it turned out – it’s an interesting combo of colors (one i would not choose on my own) and an interesting take on the fishbraid (which really is one of my favorite techniques because it’s so easy yet looks so complicated). if i were to do this mani over the only thing i would change is to try and get each layer closer together to try and fit in more (so it’s not a giant S). oh and also i might try to remove some of the polish as i go – the tips of my nails got real thick because instead of painting stripes i painted the whole tip of my nail each time (the polishes were too transparent and you could see the overlap). 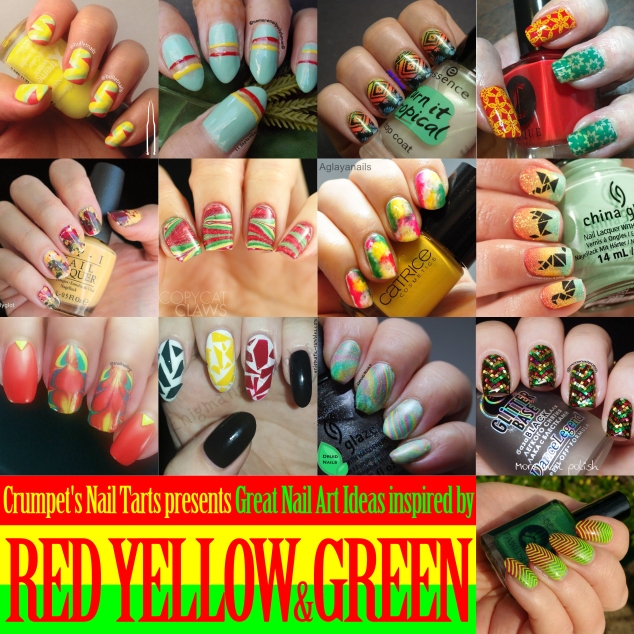 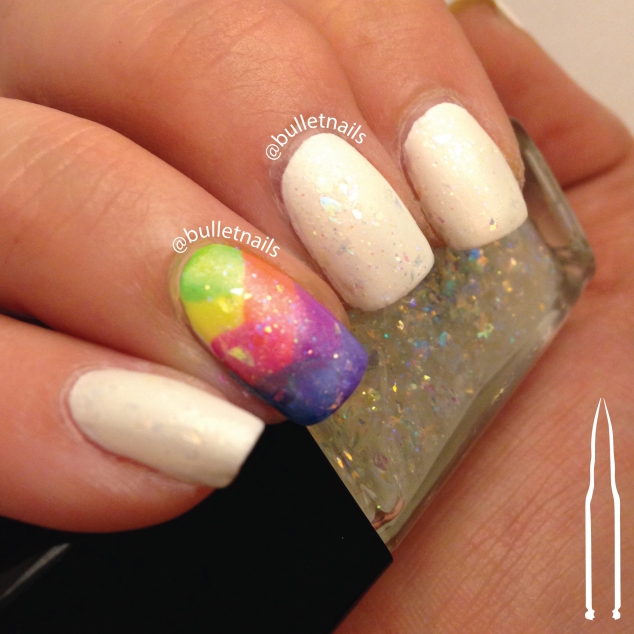 so i tried to think of something unusual. when i had this prompt during my 31-day challenge i modeled my nails after a green rose chafer beetle. that was fun and different. and i wanted to be fun and different again.

then it hit me – use your spirit animal! which is a unicorn. they bleed glitter and fart rainbows. and impale their enemies with a giant sparkly shaft on their faces. what more could anyone ask for?

i started with a shimmery white basecoat and topped it off with iridescent flakies. my accent nail is a beautiful sparkly unicorn braid.

i’m a little sad about the pictures – it was tough getting a shot of these nails. the sparkles and flakies on the white base almost always showed up as solid white. :( and it’s been cloudy since i painted them so can’t try any sunshine photography… 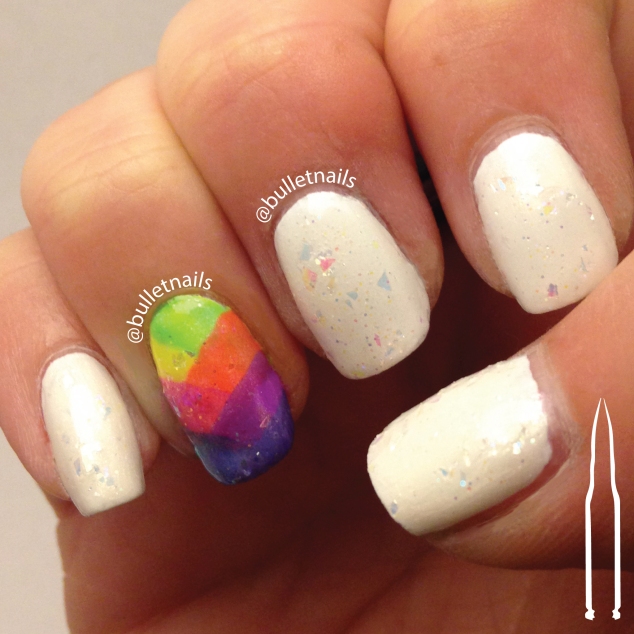 i really liked my last fishtail, so i decided to try another one this week. i got a shipment of model’s own polish a while back and still hadn’t used this coppery color that i had been most excited about. unfortunately the color didn’t turn out as awesome as i had hoped. next time i use it i’ll have to do more layers (hopefully to make it more copper than gold) and/or do more of a basecoat (white or maybe brown?).

i also ended up doing 5 colors in my fishtail, but this was solely to break up the monotone that i had going once my first three colors were down (the copper, gold and silver). i liked the pink splash so ended up changing the solid color on my other three fingers to match that instead. 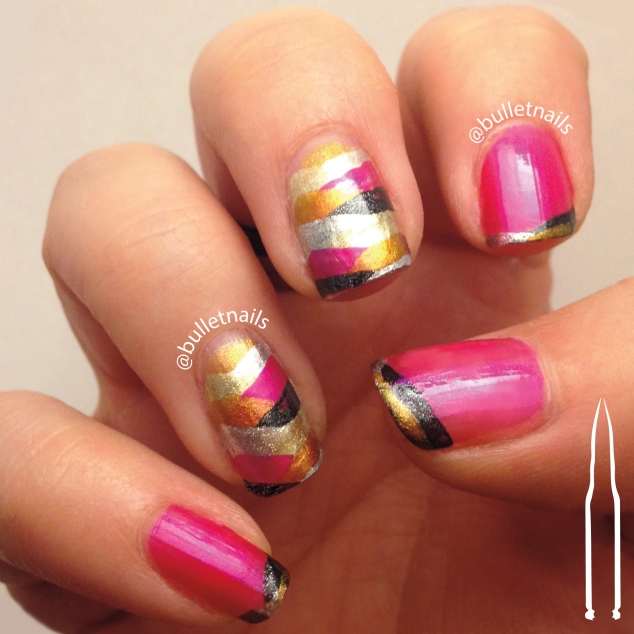 overall i like this technique – i’ve gotten a lot of compliments (because it looks complicated) and is still easy to do. it just takes a long time for all those layers to dry!

my first time doing a fishtail! i really like the way this turned out :) the pink and purple are both new – from, torrid, a really great clothing store for curvy girls – and of course i wanted to do something with them right away. 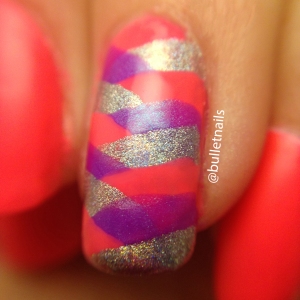 the colors look really nice together and the pink even makes me look tan (even though i am the exact opposite of that!). the only trouble i ran in to was that the colors aren’t quite opaque enough for the fishtail to work properly. because of this i had two options (neither ideal): 1 –  paint on a thin to normal coat of each color and just deal with being able to see the color underneath or 2 – paint thick or double layers of each, doubling the drying time and taking up my entire evening. as you can see, i went with more of option #1.

after wearing this mani for a few days all the pink nails started to chip. the fishtails were fine though so instead of redoing the whole thing i repainted the pink to purple. i’m really happy with being able to keep these a few extra days – they’re cute and like a whole new design (but way easy!).