for my green freestyle the first thing i thought of was a mermaid tail. so i gathered up all my green polishes and just started dotting away. that’s kinda all there is to this one…

i finally just saw episode one of rupaul’s drag race season 9! honestly this whole thing has been a let down. it starts out with the show now being on vh1 and the fact that it pretty much does not exist online ANYWHERE!! tv networks need to realize that many people are moving away from cable, and if they want our business then they’re going to have to make show available to us (i pay for 3 different tv services and am willing to sit through commercials for the many networks that provide their content for free).

anyway – i finally found a friend with cable and it seems i will be bugging him every week to get my fix.

i’m going to keep watching and hopefully it’ll get better, but i’m worried – i watched america’s next top model for 22 seasons and when (for the 23rd) it moved to vh1, the set-up, judges and contestents were so… blah… that i didn’t even finish the season. i hope and pray that this same fate won’t befall drag race.

anyway, rant over. kind of. the design i did on my nails was farrah moan’s workroom entry outfit. i chose this one because (besides being easy to paint) i both liked and disliked it. i liked it because it’s just a chain and panties (i liked the potential here). but i disliked it because it could have been so much more. and why on earth did you wear tighty whities?!?! it either needed to be nude panties so it looked like she was completely nekked or a fun color or lace or something to be sexy. this just looked like she stole some little boys underwear from the laundromat on her way in…

so i gave up “sweets” for the month of february. just to see if i had the willpower to do so, to see if after not eating them if i would still crave them, and hopefully to loose some weight. well i did, i still do (but not as much) and i did. so success. a month later and it’s easier to not have sweets very often. i have been able to choose healthier snacks (apples are my current favorite) and hopefully i will be able to keep up with this.

during this no-sweets-february – chocolate was the hardest thing to live without. so i am paying homage to all the chocolate that i did not eat in february, and hopefully nails-that-look-like-chocolate will be enough to not eat it too much now either ;)

i used three different colors on top, i was thinking white chocolate caramel and dark chocolate. and the base would be milk chocolate.

okay, i’ve got to stop writing about this before i talk myself into finding a candybar…

this week’s theme is spring animals. at a loss for something to paint i googled it. and ohmygoodness i died looking at all the super cute baby animals that popped up on my screen!!

unfortunately i knew i would never be able to do justice hand painting these cute little furry friends, and i’m assuming there will be a lot of stamping going on this week, but i neither have stamps that apply nor the skills to make it happen.

so i stuck with what i’m comfortable with – simplifying! each nail is a different baby animal. can you tell what they are?

END_OF_DOCUMENT_TOKEN_TO_BE_REPLACED

i’ve been thinking outside the box lately with my nail techniques! this week for the rainbow theme i used gel pens for my mani! 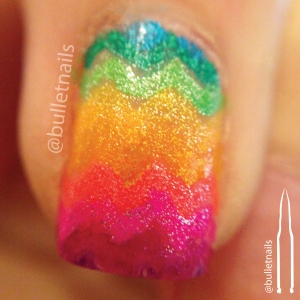 and it worked SO well. i’m still kind of surprised they 1) drew on my nails (actually on the peel of base coat), 2) that they didn’t completely wipe off or smear when i put a top coat over them, and 3) that they stayed on for a few days!

looks like my bullet journal isn’t going to be the only thing i use these pens for now! expect to see them again in the future!

sorry there are so many exclamation points here – i’m just super pumped how these turned out :)

i like the rainbow pattern that i did on my non-accent nails the best. i like how the edges are dark and the center is light. but i did the opposite on my ring finger just to see what it would look like. i don’t like it as much but i do like that you can see the chevron pattern better.

today i was feeling the most literal! i couldn’t think of any ideas for this challenge then suddenly it hit me – be weird ;) i had 4 out of 5 of these tapes already sitting on my desk from other projects and i just figured, why not!

this is not a lasting mani. i had to press on my nails in between every photo for some of the tapes to even look like they were stuck down. the duck tape in particular wouldn’t stay stuck. which surprised me because it has the stickiest adhesive.

the one with the least sticky adhesive, painter’s tape, actually stayed in place the best. huh. the electrical tape stayed fairly well too – i think because it’s so stretchy it can handle the curve of my nails better than the thicker duck tape.